I’ve been wanting a patched jean jacket for a while now. I’m very picky about what I’d want on it, and I’ve always thought I would want it to say something to people that I believe in or shows my personality more. (Cause I guess I don’t show that enough with my normal clothes.) So lately on Instagram, I’ve seen more and more feminism/women empowerment pins and patches, that I loved. Especially, when I saw the patch below that is the heart booty that says ‘not asking for it’. But, that’s when I realized exactly what I really wanted on my jacket. Last fall (2017) was in I decided I was going to DIY my jean jacket with patches. I started collecting and found my favorite website now for patches called Gimme Flair. And soon realized patches are EXPENSIVE. They’re like $7-$15, or more, depending what you want and the size. Plus shipping. So, I had to decide which ones I loved and which ones I could part with. Which is why my collection isn’t that large right now, but it’s a nice start. 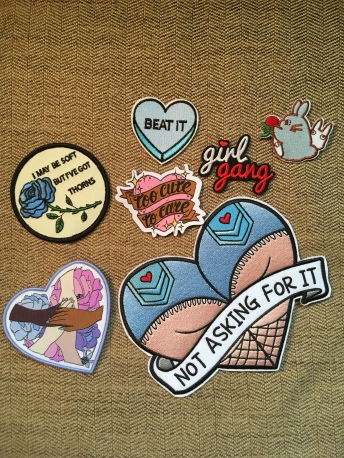 Where The Patches Are From

The “Not asking for it” (by Radical Buttons), “Too cute to care”(by Lillian Cuda) and “I may be soft but I’ve got thorns”(by Tender Ghost) are all from Gimme Flair, though they all do have individual stores too, which have been linked! The girls’ hands in a heart are from Love Struck Prints. I’m not sure where I bought the Totoro patch. And the Girl Gang and Beat It are originally from Sugarbones, which I found out I accidentally bought knockoffs and now I’m mad at myself… So don’t make my mistake! Support the real brand!!

It’s Levi’s jacket, I got it second-hand. It’s amazing quality, of course, and super comfy. Definitely, something I would want to wear all the time. 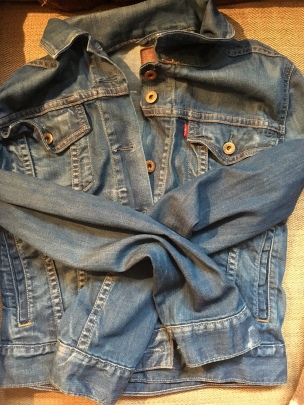 Deciding which layout I like the most with these, I definitely know I want to keep them on the back, to begin with. I may add pins to the front, so I wanted to keep that open. But, so far I’m leaning towards the second, it’ll keep the rest of it open for when I want to add more.

The only patch I wanted to make sure was straight and in the center was the largest one. So I started to measure the length of the middle section of the jacket. And then the width. Until I found the middle of my jacket and marked it with my white marking pencil.

And set my iron on…  Yes, I am doing this in my kitchen, I’m in the middle of creating a new sewing area. 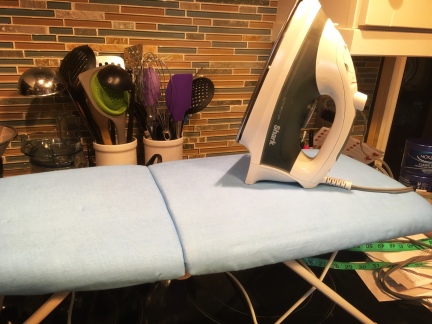 So once the iron was hot enough, I started on the right side (the side that will show) of my patch. I laid a thin towel over the patch just in case, and applied the iron on to the patch pressing down for about 20 seconds, then moved it around for about a minute. Since this was the thickest patch I had, I also turned it over to the wrong side (the inside of the jacket) and ironed the same time as well. I just made sure that it was glued to the jacket and wouldn’t come off.

I continued this on all my patches, varying in times since some of the patches were smaller and thinner. Just keep an eye out for them so they won’t overheat? I don’t really know if you can overdo the time on patches… let me know in the comments if you can! But, I would play it safe and only keep the iron on for 15 seconds- a minute, depending on the patch. 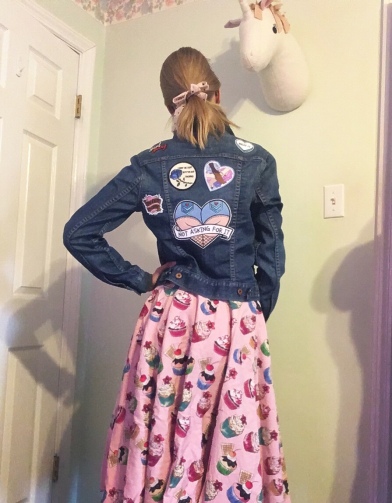 I love it! Since I only have 5 patches on the jacket, I know it’s a little empty, but I’ll be adding more as time goes by. I also left the Totoro patch off of it, for now, it doesn’t really go with the other ones yet. But, it’ll be on there soon. I paired it with a bow in my hair and my cupcake skirt by Lindy Bop!